The true cost of your Christmas turkey and other meat

There's a discussion on a Facebook group I am a member of about how the cost of meat this year seems to be higher than ever. Various options have been given as to where you can buy the cheapest turkey or other meats. One person said they saw a bird (she wasn't sure what) on sale for 61€ whilst another lady said she was really pleased to have bought a supermarket turkey for 18€.

The fact is, over several decades now, we have been conditioned into thinking that meat is not especially expensive when the true cost, on all levels, is actually much higher. The 61€ bird is more than likely the correct price where the bird will have had free range (not crammed in an over-crowded barn) whilst not being pumped full of growth hormones and antibiotics etc in life and once dead will  not have been injected with water to plump up its size and where everyone involved in its life, slaughter and processing will have been paid a decent wage. To produce a turkey (of any size) at just 18€ means some serious corners will have been cut. How many thousands of birds will have been stuffed into a small area, how many underpaid worker, will have toiled over their short lives earning only just enough money that they themselves can only afford to buy factory farmed meat? And what is the environmental impact of the large amounts of manure produced by such a concentration of birds in one place?
The intensive factory farming of animals, which reduces them to purely a mass of financial units, is the only way you can get an 18€ turkey or a £2 chicken or how ever little you pay for a cheap burger or sausage.  Yet I believe many people don't chose to ignore these facts, they simply are unaware of how their meat is produced and this fact makes me both sad and angry. How can people have no idea of what type of life the animals lead in order to put cheap meat on their plates?  Someone elsewhere on Facebook got really huffy with me recently when I showed a picture of mass cattle pens and told me they couldn't possibly be raised like that and it must have been an auction site. I told this person to look up how cattle are raised in places like the Americas but I have no idea if they went and looked. It is just so wrong that we live in a world where factory farming is allowed and people are not taught about it at all. It's all pictures of straw chewing farmers and rural idylls on the packaging which could not be further from the truth.
I didn't reply to the lady who bought the cheap turkey, although I did have to sit very hard on my hands not to.  Part of me thought I should help people realise the true cost of producing (decent) meat and what happens when we demand cheap meat but part of me said let it go, it's Christmas and who knows what other stuff the person buying the 18€ turkey has going in in their life at the moment. I am also painfully aware that if only free range meat with high welfare standards were sold it would be at a price that many people could not afford. No doubt those who are vegetarian or vegan feel this is what should happen so that we are priced out of eating meat but I am looking at the here and now with families trying to feed themselves as food prices rise and we are not going to see a mass shift away from eating meat in the immediate future.
This blog is not about whether we should or should not eat meat I do not want it turning into a be vegan battle cry so I will not publish any comments of that nature. Maybe in the future we will live in a world where we don't eat meat and food poverty will only known about through history lessons but in the meantime many people do eat meat and many are pleased to be able to buy it as cheaply as possible without a second thought for the welfare of the animal or the livelihoods of those who work in the meat industry. How do you make people see the true picture and when you do, how do you make then care when all they want is to eat a fast food burger, a turkey at Christmas or a bacon sandwich?
I did reply to the lady who thought a 61€ bird was too expensive saying that it probably represented a realistic price but neither she, nor anyone else, replied. Do you think I should have said something to the lady who was so pleased to have bought the cheap turkey? What would you have done? 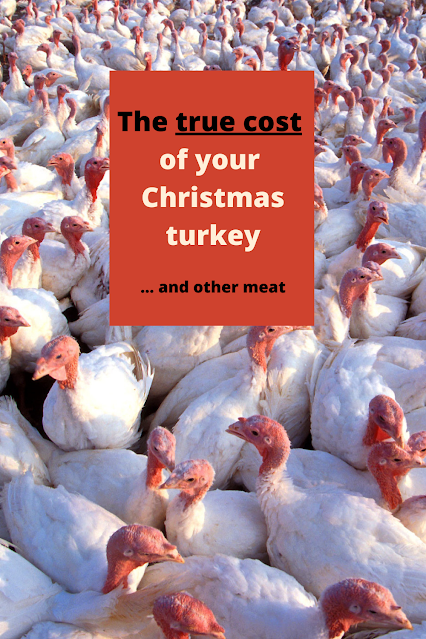