My Facebook and Instagram feeds have recently been inundated with sponsored posts from companies selling ocean-themed jewellery, especially turtles, each purporting to support ocean conservation and removal of plastic from the oceans.  Each post is full of glowing reviews from happy customers but their websites all lack details on exactly how they are helping the world's oceans or how much they are funding conservation projects. Something about them didn't feel right and I needed to investigate further so I focussed on one company that recently appeared in my Facebook feed: Ocean Project.co. 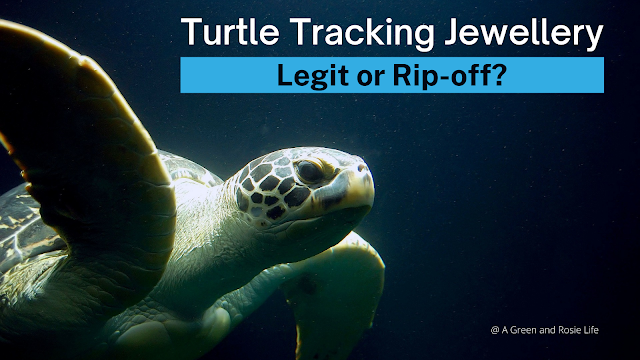 From their Facebook page (and yes, that is a copy and paste, not my typing errors):

"Ocean Project is a company with a vision to make a difference in our oceans ecosystems. We've donate to Ocean Cleanup Organization around the world. The amazing impact our brand has wouldn't be possible without YOU!"

I'm not at all sure what their vision is or what their amazing impact is but they are clear (it would seem) that YOU are helping them to achieve what-ever it is they have a vision about.

From there I can see they sell a range of jewellery items and clothes and that "Every purchase cleans our oceans."  In fact under their MISSION they claim:

Elsewhere this is quoted as:

Interesting use of words: "pledged ocean-bound plastic cleanup" and I'm not even sure what that means but let's assume it means that they have removed that much plastic from the ocean.  55,156 pounds is the equivalent of just over 25 tonnes.  Now their Facebook page was set up in January 2021 and I am writing this 10 months later and by the magic of a bit of maths that means that they have, on average pulled some 83kgs of plastic from the ocean each day or the weight of a 13 stone person. Not bad you might think?  Hmmm ...

Let's put this in perspective. It is estimated that around 10 million tonnes of plastic are dumped in the sea each year, or over 27,400 tonnes per DAY ... or approx 604,000,000 pound per DAY yet this company, Ocean Project.co has only cleared 55,156 pounds. And that is assuming the company was created in Jan 2021. In fact there is evidence online that it was created before then and is probably a rebranding of an older company that changed its name to try and evade the negativity around its claims and business model.

But I'm feeling generous and clearing some plastic is better than nothing, I suppose. However, I rather imagine the people who have paid out for jewellery and clothes might have expected a bit more plastic clearance.  Now, talking about the items they sell it seems they might just be overcharging their customers:

Right now their website shows this Save the Turtle Necklace at the currently "discounted" price of €22.14 (or somewhat bizarrely 4 interest free payments in dollars): 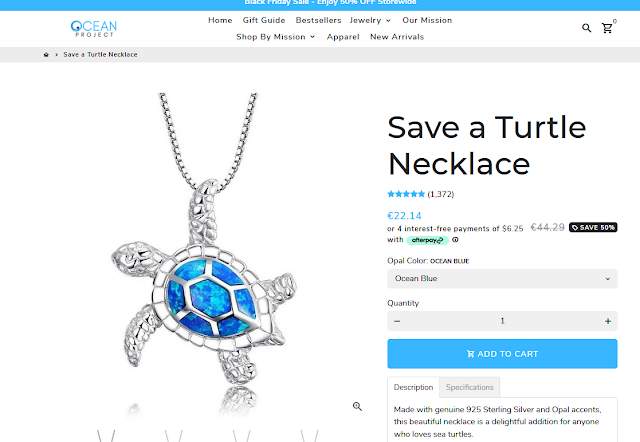 I did a little searching and it took very little time at all to find the exact same necklace on sale on a website called Aliexpress for discounted price of $0.01 (Normal price $4.87-$5.52)

I also found a Keep Our Sea Plastic Free T-shirt on Ocean Project.co's website for €26.57 (at a whopping 50% off!!) and the exact same T-shirt on Aliexpress for around €5.

That's one heck of a mark up and with large numbers of items being sold in the name of reducing plastic it would appear Ocean Project.co is making a lot on money whilst clearing a pitifully small amount of plastic.  But I'm afraid there's more.  On Ocean Project.co you can simply PAY to have a certain amount of plastic removed from the ocean through their Pull Plastic Project:

For $4.95 (approx €4.30 or £3.60) you can PAY someone to pull 2.2 pounds or 1 kilo of plastic from the ocean and you can even track where it is being removed from although I am intrigued to know how you track plastic clearance.

With the jewellery you are also supposed to get a tracking code that enables you to track what-ever animal item you have bought.  Comments online, though, show that these tracking codes are often missing or just one code is sent out time and time again. And it gets worse when you learn that you can actually track turtles for FREE via the Sea Turtle Conservancy who are also quite clear about the fact that Ocean Project.co and a raft of other similar companies have taken THEIR tracking codes without their permission.

Apparently I am not the only person who is unhappy with this company and on Facebook several Ocean Project.co posts have angry "likes" and one lady asked why this was. I replied but within a few hours my reply was deleted and I was blocked from being able to add a like/wow/angry etc or comment/reply. You'll also often see that a post has x number of comments but the actual number is lower. That is because comments are still counted even when the page has removed them. 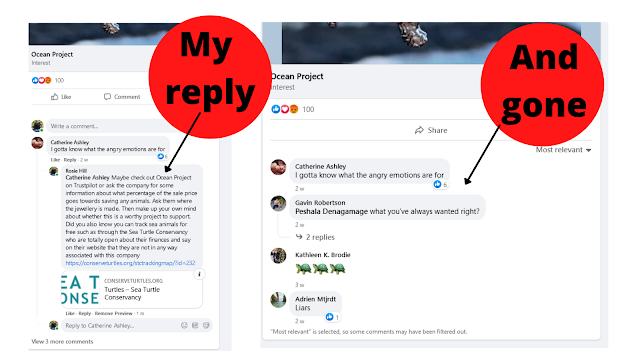 It seems they did not like me pointing out that people search out some facts or suggesting they go and check reviews on Trustpilot (or other review sites).  Well over half the reviews are one star and talk about everything from goods not arriving, tracking codes not working or being duplicates and the fact that the items are shipped from China, where they are made, and are of very poor quality. One review I saw also talked about how much plastic packaging the jewellery arrived in.
Such merchandising of jewellery and clothes is not only restricted to turtles. In the last couple of days I have seen several adverts for similar companies relating to coral, elephants and bees. All of them claim to fund conservation in some way but are all vague in how they do this and their reviews on places like Trustpilot all tell a different story: non-delivery, poor quality, terrible customer service etc and that's without touching on their terrible environmental track record.  Oh and also be very wary of a company that will ship products worldwide. Even a sustainably made product that funds genuine conservation projects loses so much of its green value if it is shipped across the world to get to you.
Since first publishing this post another sponsored post from an obviously fake profile (which I have reported) came up on my feed and that led me to find a bit more information. The Facebook page Ocean Project .co is a SCAM also exposes the company's malpractice and has a link to a genuine turtle tracking charity and Ocean Project.co also features on the Facebook page Sponsored Ads Exposed, a page dedicated to exposing Facebook Sponsored Ads scams.

These types of company really make me angry. They exploit the emotions people feel when they see pictures of  sea creatures swimming through plastic-filled waters or worse still killed by plastic yet feel powerless to help. They take advantage of people's goodwill for their own financial gain.  Sadly all their customers really end up doing is buying some very overpriced products whose overblown profit margins line the pockets of whoever is behind these companies.

If you genuinely want to help sea creatures then my advice would be to look for legitimate charities, the ones that are completely transparent about what they do with your money.  And before you part with any cash either to a charity or a company, do your research. Check out reviews on independent sites, search for any articles written about the companies and if in doubt don't buy from or support them. Why not have a read on this blog post I have written outlining the many ways to identify scam sites. You can also track turtles for free via Seaturtle.org.

Finally, how about doing your own litter clearing when you are next at the beach. I don't imagine it would take that long to get to a kilo on a badly littered beach. 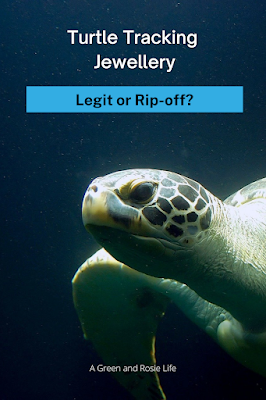